Its that time of year again! See here for details on when you need to place your orders by to receive those all important deliveries to see you through this Christmas period!

Join us in celebrating Nebbiolo Day at Lindley Hall on Monday 13th November!

I thought I’d met most of the eccentrics in Italian wine—the experimental outliers who’ve made an impact by following some singular intuition, rare grape or other personal muse.

Then I met Luigi Cataldi Madonna in the hot, dry hills of Abruzzo. Charming and self-effacing, he proudly cackled in his smoker’s rasp: “I am the champion of all the crazies!”

Cataldi Madonna, 65, is a philosophy professor at the University of L’Aquila, in the stately mountain city still recovering from the deadly, devastating 2009 earthquake there. Twenty-one years ago, he was diagnosed with bipolar disorder, and he considers it a plus for his craft.

“It’s important for wine,” he says with a laugh. “If a producer is not maniacal, he cannot make good wine.”

The son of a noble family in Ofena (pop. 500), Cataldi Madonna is known in central Italian winemaking for two things. First, he’s been the foremost advocate of winemaking in the rugged foothills of the Tirino Valley, below the towering Gran Sasso massif, in an area nicknamed "Il Forno d’Abruzzo” (“the oven of Abruzzo”). Second, and perhaps more important, he was the region’s first champion of Pecorino, the heirloom white grape that’s taken off like a rocket in the 21st century.

A bit of historical context: Though the first pure Pecorino bottling is widely believed to be a 1990 vintage from Tenuta Cocci Grifoni to the north in the Marche, that estate labeled the wine “Colle Vecchio,” after the vineyard. According to Italian indigenous grape expert Ian d’Agata, the grape had several regional names and Cataldi Madonna was the first in Italy to print “Pecorino” on a wine label, with the 1996 vintage.

“Now, everybody in the last 20 years here has planted Pecorino,” says Davide Acerra, spokesperson for the Consorzio Tutela Vini d'Abruzzo, the regional wine organization. “And Cataldi Madonna is a reference point. He was the first here.”

Pecorino’s boom has been fueled largely by the appeal of its name, which it shares with the beloved Italian sheep’s milk cheese. The grape variety, according to local lore, derives its name from the pecore (sheep) that ate the vines' leaves during their summer passage to higher grazing grounds or the sheepherders who snacked on the grapes.

Cataldi Madonna took over the now century-old family wine estate in 1990, following in the footsteps of his father who was the first in the family to bottle Cataldi Madonna wines in 1975.

“My father was an architect, and he had no extra time,” Cataldi Madonna says on a bright afternoon before harvest, as he walks down the narrow country road between the vineyards with his daughter Giulia, 28, and Tuscan consulting enologist Lorenzo Landi. “I am a professor, so I had lots of time.”

In his first year, Cataldi Madonna decided he wanted to find an alternative to the area’s Trebbiano wines and discovered Pecorino at a vine nursery. The low-yielding grape—marked by high acidity, sugar levels and aromatics—was often used as a minor part of white blends.

To hear Cataldi Madonna tell it, he was wowed by the grape, and he immediately planted his first 2 acres in the vineyard called Frontone, which is next to his winery at 1,200 feet in altitude.

Cataldi Madonna made the first vintage, 1996, conducting basic fermentations in stainless steel. “In the first years we made a disaster,” he says. “Everyone said it tasted like lemon soda! But 2,000 bottles—even if it's lemon soda—are not difficult to sell.”

Over more than a decade, he experimented broadly. Between 2000 and 2007, he tried fermenting Pecorino in oak barriques, but found those covered the aromas. “It’s not easy to balance all the aspects of Pecorino—the structure, acidity and aromatics,” says Landi, who joined Cataldi Madonna as a consultant in 2003.

In the past decade, the two have settled on a method that involves a cryomaceration (a more extreme version of cold maceration that involves freezing the grapes to extract more flavor and other compounds) before pressing, followed by fermenting on indigenous yeasts and aging on lees in steel tanks.

In 2019, Cataldi Madonna signed the estate over to his daughter Giulia, who studied viticulture and oversees production of Montepulciano d’Abruzzo reds, deep-colored Cerasuolo d’Abruzzo rosé and a Trebbiano d’Abruzzo white from 75 acres of vineyards.

But Pecorino remains his obsession, and he hasn’t loosened his grip on major decisions.

The winery now regularly makes a pair of Pecorinos under the geographical designation Terre Aquilane IGT: the entry-level Giulia Pecorino (86 points, $24 for the 2016 vintage) and the harvest selection SuperGiulia Pecorino.

Every year, Cataldi Madonna vinifies the two original acres of Frontone Pecorino separately. But until now, he has only released one vintage as a separate cuvée—the 2013 vintage.

Ask anyone in Abruzzo what they think of Pecorino and they’ll say it’s a wine still being discovered.

“It’s in a state of change,” says Cataldi Madonna, the philosophile. “You see, Pecorino is not a closed argument.” 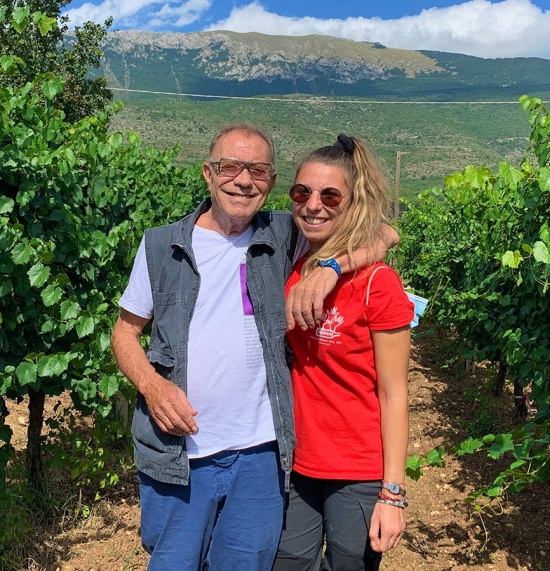