Sweet Winemaker of the Year 2022

How terroir makes a difference in Barbaresco

A recent tasting of single-vineyard Riservas from acclaimed co-operative, Produttori del Barbaresco, was a fascinating opportunity to delve into the differences between each vineyard site and see how Barbaresco terroir can make a difference.

Barbaresco has been overshadowed in the past by Barolo, but in fact these two areas, separated by just over 10 miles, aren’t dissimilar in quality these days. In fact, some of Barbaresco’s vineyards – Asili, Monstefano and Rabajà, for example – stand side by side with the best from Barolo.

The Barbaresco region sits adjacent to the Tanaro river. The four Barbaresco communes – Barbaresco, Neive, Treiso and San Rocco – cover about 700ha in total. The hills vary in height from around 200-400 metres above sea level.

Founded in 1958 by Don Fiorino Marengo with 19 growers, the Produttori del Barbaresco co-operative now has 50 members with around 110ha between them. In a successful vintage, nine crus are bottled as Riservas, exclusively from the commune of Barbaresco. This is in addition to a blended Barbaresco and a Langhe Nebbiolo DOC. In total, a vintage at the co-operative can produce 500,000 bottles.

This Langhe Nebbiolo is sourced from across the region and on a combination of soil types. It's fermented in concrete to preserve freshness, before ageing for five months in large oak barrels. It displays ripe, vanilla-scented hedgerow fruits with a fresh, crunchy, sweet cherry aroma. In the mouth it has impressive intensity and plenty of playful acidity. The dark fruit flavours are supported by a supple texture and the nuances of spice are perfumed and exotic. A brilliant wine for early drinking and great quality considering the basic appellation.

Produttori's 2016 Barbaresco is delicious now and is only going to get better. It's a deliciously fresh wine, its structure tucked away behind clean acidity and earthy layers of dark, ripe fruit. This is a sculpted wine, with fine, powdery tannins that are currently a bit drying on the finish but should resolve.

Similar in makeup and location to Montefico but on a steeper slope, Montestefano is one of the last vineyards in Barbaresco to be picked. It was first produced as a single-vineyard wine by Produttori in 1974. The 2015 is big but balanced: Intense aromas of macerated cherry are joined by some blackberry and barrel spice notes. The acidity is perfectly balanced, playing off the structure and density on the palate, helping this to remain light on its feet throughout. Superb. 14,000 bottles and 1,300 magnums produced.

Asili has a warmer microclimate than most of the other vineyards here. It was first produced by Produttori as a single-vineyard wine in 1967. The 2015 is tight, tannic and reserved, with some bright strawberry, raspberry, cranberry and vanilla creeping out of the glass. In the mouth it has some meaty savouriness, and gives a hint of the complexity to come, but as it stands this needs a lot more time to become approachable. Scored for its potential. 10,000 bottles produced.

Rabajà has a complex mix of soils and at its northern edges joins the vineyards of Asili and Muncagota. This was first bottled by Produttori as a single-vineyard wine in 1971. The 2015 is darker and richer than all here other than perhaps the Asili and Rio Sordo. It has an intense meaty, inky character framed by wood and with an overlay of vanilla. It combines power and density with elegant tannins and high acidity. 17,300 bottles and 1,300 magnums produced.

Montefico lies immediately to the south of Ovello and just north of Montestefano. Produttori's first single-vineyard release from this site was in 1970. In 2015, it seems to combine the tightness of Asili with the fragrant, red-fruited beauty of Muncagota. There's some earthy complexity and black pepper spice, accompanied by gentle but purposeful acidity. 6,500 bottles produced.

This small south- southwest-facing vineyard near the town of Barbaresco has been the source of a single-vineyard wine from Produttori since 1967. The 2015 Riserva is concentrated and intense, with rich meaty and gamey flavours and some iodine and ink depths. The tannins are sweet and integrated, and the finish has subtle vanilla and wood touches. It's a softer expression compared to most of the other vineyards here, but that doesn't mean that it won't age - just that you can enjoy it a bit sooner. Around 6,500 bottles produced.

Ovello is the northernmost vineyard in the Barbaresco commune - and the largest. It was one of the original five vineyards individually bottled in 1967 by Produttori. The clayey soils and exposure to the cool northern winds gives this wine a full body and structured tannins. The 2015 features a woody, vanilla-toned fragrance with some delicate cherry fruit. In the mouth it's a latticework of well integrated tannins with lacy acidity draped over deep hedgerow fruits, followed by some subtle wood spice on the long finish. This is one to leave for a few years, but there's so much potential here. 17,000 bottles and 1,200 magnums produced.

The southeast-facing Muncagota vineyard catches the morning sun, giving this wine a slightly lighter character. This 2015 has delicious red berry and cherry flavours and scents. The tannins are slightly more rustic, perhaps, and it's the least full-bodied wine here, but its earthy elegance makes this a refreshing change for a Riserva. 13,000 bottles produced.

Pora is one of Barbaresco's largest vineyards, situated on a southwest-facing slope close to the river where the soils are relatively fertile and loose. Produttori has made a wine from Pora since 1967, and today around 16,500 bottles are produced in vintages when it's made. This 2015 still has a pronounced woody aroma, and while it's mouthilling it manages to retain some elegance. It's obviously youthful: the vanilla- and spice-infused wood flavours dominate and hold your attention, the fruit unable as of yet to punch through. It does have plenty of promise, however, and you could expect the succulent and ripe fruits to hold more sway over the next decade as the wood integrates.

At the southern end of the commune of Barbaresco lies Rio Sordo, known for producing powerful wines. First produced by Produttori in 1978, this is right on the mark, with a denseness and muscularity that makes it stand out in the lineup. It has an inky, meaty depth which seems to have absorbed the wood into it so that it's not so pronounced, overlaid with plenty of complex, savoury damp earth character. This is less pure and ripe in feel that the Pora, and although the acidity still has presence, it's softer, more gentle. This is a smooth, dense, intense wine that you will want to sink into. 10,000 bottles produced.

How terroir makes a difference in Barbaresco - Decanter.pdf 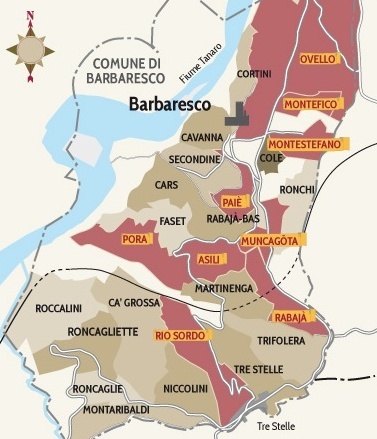