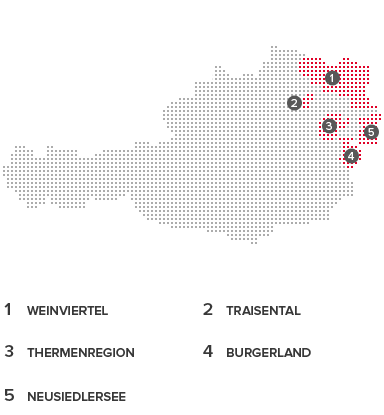 Austria ranks today amongst the greatest dry and sweet white wine producing countries in the world, and its idiosyncratic reds made from little known native varieties have gathered a bevy of admirers too.

At a latitude of 47 to 48 degrees north, Austria has a continental climate with extreme variations in winter and summer temperatures. Local geographical features affect these variations, such as the River Danube (known here as the Donau) which helps to moderate temperatures. Lake Neusiedl in the far east of Austria has a similar influence, and its unique microclimate allows for copious amounts of noble rot to form almost every year, with which some of the world’s greatest sweet wines are made. The warmer climes of the Pannonian Plain, which extends into Hungary, assists in the production of quality red wines.

Not surprisingly, Austria’s appellation system is similar to Germany's. Wine quality levels are based on the must weight (sugar level) of grapes. New laws in 1985 curbed yields and imposed higher levels of ripeness for each wine category.

Austria also has its own specialties: Ausbruch is a sweet wine somewhere between beerenauslese and trockenbeerenauslese and typical of the area in and around Rust,  Strohwein is also a sweet wines made from air-dried grapes, and 'Trocken' (meaning dry in German) which have become fashionable. Quality-conscious producers from the highly regarded region of Wachau have also created their own individual wine styles: Steinfeder (light, fragrant dry wines), Federspiel (fruity, elegant wines comparable to German Kabinett) and Smaragd (high quality wines not unlike dry Spätlese).

Austrian dessert wines are some of the richest and the best in the world. The most uniquely Austrian variety is Grüner Veltliner, the most widely planted white grape variety, used to make both dry and sweet wines. The most common are high acid, spicy, mineral dry wines which are food-friendly and ageworthy. Another abundant variety is Welschriesling, usually made in a refreshing style with aromas of green apple, but can give concentrated, thick dessert wines. World class Weißburgunder (Pinot Blanc) produces a refined, mineral-rich wine from shell-limestone soils, while Grauburgunder (previously called Ruländer in Austria, it is better known as Pinot Gris or Pinot Grigio) elegantly combines freshness with weight and body. Likewise, Chardonnay (also called Morillon), Gewürztraminer and Sauvignon Blanc (especially) produce world class wines. Among the red varieties, most famous are the indigenous Blauer Zweigelt, Blaufränkisch, and St.Laurent, but excellent reds are made from Roter Veltliner, Blauburgunder (Pinot Noir) and the little known spicy Schilcher Rosé as well.

Niederosterreich (Lower Austria) is the biggest Austrian wine region, but wines from Burgenland, Steiermark (Styria) and Wien are increasingly sought after nowadays. There are eight specific wine growing areas in Niederosterreich, of which Kamptal, Kremstal, Traisental, Weinviertel, and Wachau are best known. The Carnuntum and Thermenregion areas south and east of Wien enjoy a warmer microclimate and this is where some of Austria’s most exciting reds are made today. In general, the country’s best reds come from its far-eastern vineyards, which experience maximum sunlight and warmth due to warm winds from the Pannonian Plain. Steiermark produces one of the world’s best Sauvignon Blancs, but excellent aromatic white wines and Gelber Muskateller (White Muscat) too. Wien, the wines of which were once previously known only as simple everyday “heuriger” (or tavern) wines, have improved considerably and enjoy cult status in Austria and abroad. From wines that are relatively inexpensive, to those more sought after and costly, from dry and crisp to rich and sweet, Austria has something for every palate.