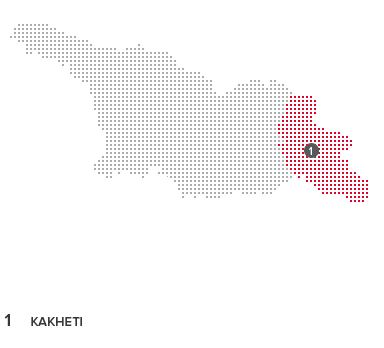 Steeped in cultural richness and ancient traditions, Georgia is one of the most fascinating wine-producing countries in the world. Widely considered as the ‘birthplace of wine’, archaeological evidence of winemaking here dates back to 6,000 BC, when the South Caucasus people found that unfermented grape juice would turn into wine, when buried underground, over winter, in traditional clay pots. Known as qvevri, these ancient egg-shaped clay fermentation vessels are still widely used in Georgia today.

Since the country’s independence in 1991, Georgia’s reputation for winemaking has gone from strength to strength. And even more so recently, since making a name for themselves in the ever-expanding natural wine world - although this is only a small part of what they have to offer. Many winemakers opt to stay true to their traditions by fermenting on skins, using indigenous yeasts, and bottling wines without filtration or clarification. Often in qvevri, which maintains a naturally consistent temperature when buried underground, working very much like temperature-controlled tanks but all natural. Orange wines, such as these, are thought to have originated in Georgia and have become incredibly popular with the modern consumer for their deep colours, bold flavours, amplified aromatics, and incredible texture.

Georgia is home to a plethora of native grape varieties, over 400 in fact, but only 38 varieties are officially recognized for commercial production. The continental climate makes for ideal conditions for quality viticulture. Very moderate, rarely ever extreme, the Black Sea to the west provides rainfall and balanced temperatures, and the mountains to the North shield from the cold air. The winters here are mild and summers are beautiful and sunny, but never too hot. A small but bountiful country, with an incredible winemaking history, producing wines with bags of personality - Georgian wines are on the rise and are a must-try for wine enthusiasts!