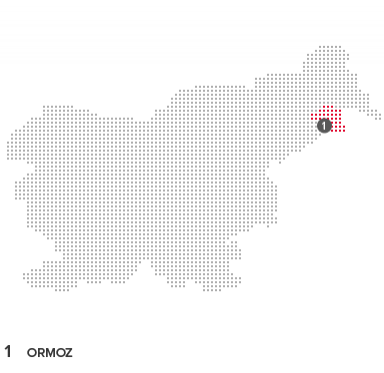 Beautiful Slovenia has always made wine. Positioned at a crossroads between north, south, east and west, viticultural and oenological knowledge from all the prominent winemaking nations passed through Slovenia and wine was known to the Celtic and Illyrian tribes of north-eastern Slovenia even before the Romans arrived. Accordingly, French, Italian, and German influences are evident both in viticultural and oenological aspects, as well as in the terminology used in the country and there are both varietally labelled wines, and wines under the name of the producing region. Today Solvenia's wine production is earning accolades and praise everywhere.

Slovenia lies in an ideal climate zone: between 45 ° 30'N and 47 °N, with the highly beneficial temperate effects of the Adriatic Sea which forms the country’s western border. Other geographic influences facilitate quality viticulture in Slovenia; the Alps form Slovenia's northern border, shielding the land from the harsh, cold northerly winds and helping moderate the intense continental summer heat.

Terminology for wine quality is similar to the Prädikatswein system used in Germany, and there are three main viticultural regions differing in microclimate, soil composition and viticultural tradition: Podravje, Posavje, and Primorje.

Slovenian wines range from rich Bordeaux-style red wines to aromatic white wines reminiscent of the Mosel and Rhine valleys, from the dry wines of Italy to the sweet ones made in Hungary, and even thick Port and Sherry-style wines. A number of local varieties grown nowhere else have also been developed during Slovenia's long viticultural history and are fast becoming the source of some highly interesting, much sought-after wines.