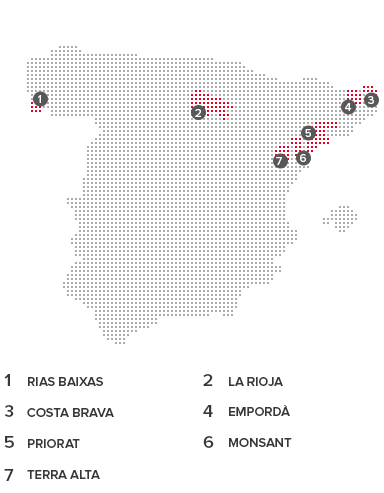 Spain’s rich history, the diversity of its wines and the volume of production (Spain is the world’s third biggest wine producer after France and Italy) makes it a thrilling place for wine lovers. The fact that both white and red wines have been greatly improved over the last thirty years is further cause for excitement. Gone are the dusty, dry reds and oxidized or neutral white wines of memories past, happily replaced by fruit-driven, fresh and highly diverse wines that will please most palates.

The two main factors influencing Spanish wine are geography and climate. Lying at a latitude of 36 to 43 degrees north, Spain stretches from the warm and humid Mediterranean coast in the south and east, to the cool, wet influences of the Atlantic in the north and a number of different mountain ranges further shape grape-growing conditions. Main grape varieties include Garnacha, Macabeo, Verdejo, Palomino and Pedro Ximénez, as well as major international varieties, and surprisingly few of Spain's plethora of native grapes are used by producers in order to make wine in commercially significant numbers. That said, some of these, such as Albariño and Tempranillo, have become household names in a very short time. Amongst the whites, Albariño is a high quality aromatic variety, typical of the northern region of Galicia. It yields highly mineral, crisp white wines that have become the must-have aperitif wine in wine bars all over the world. Verdejo is enjoying almost similar popularity levels, especially with those who prefer a more neutral, fruitier and less mineral-aromatic style of white wine. Tempranillo is by far the best known Spanish red grape (also called Ull de Lebre in Catalonia and Cencibel in La Mancha), an early ripening grape that gives powerful, slightly aromatic red wines of great tannic and ageworthy structure. Garnacha (better known as Grenache in France and Cannonao in Sardinia) can make both great Rosés and hearty reds and some of the grapes from the very old Garnacha vines can make some of the greatest wines in the world. Pedro Ximénez is a high quality aromatic grape used to make the sweetest, richest sherries that carry the same name.

Most of Spain's provinces have distinct regional and cultural differences which are evident in the wide range of wine styles made. Their autonomous structure empowers the regions to enforce their own wine laws while staying within the larger European Union framework and Spain's controlled appellation system – the DO or Denominación de Origen. The Spanish capital, Madrid, is situated at the centre of the enormous Iberian plateau – a largely arid land mass with a number of major rivers which wind their way through its many vineyards. As it is so far from the coast and has plenty of sunshine, this central region is suited to the production of red wines as well as the grape variety Airén – used in the production of brandy. The Atlantic-influenced vineyards of the north specialize in creating light, dry and refreshing white wines, while those close to the Mediterranean produce sumptuous reds that are neither as heavily oaked nor as alcoholic as they once were. On a completely different note, the north-eastern region of Catalonia is where inland vineyards located at higher altitudes excel in the production of Cava, Spain's sparkling wine produced by the traditional Champagne method. Last but not least, Andalusia in the South, with its mix of Atlantic and Mediterranean influences, is home to one of the world's greatest fortified wines: sherry.