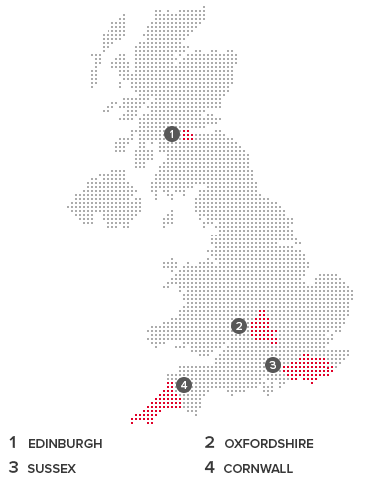 Historically the British have been more committed to drinking wine than to producing it, but in the last decade, this has dramatically changed. A growing buzz has emerged around the UK wine industry, with sparkling English and Welsh wine being the driving force behind it.

Like many grape-growing countries, vines were first brought to England by the Romans. However, the cold climate was far from ideal, and over time other forms of agriculture took priority, and vineyards were often abandoned or the land was re-planted in favour of less challenging crops. Fast forward to the 21st century however, and climate change, which has bought on a rise in temperatures across the UK, has radically changed this. In fact, British wine is booming, land under vine has quadrupled, and there are now over 700 vineyards in England and Wales, producing 10.5 million bottles of wine a year!

The majority of British vineyards can be found in the South of England, with Kent, Sussex, and Surrey being the three major regions. The climate here is now similar to that of mid to Northern France, with warm sunny summers and cold winters, and similar soil types to that of Champagne. There is no wonder then that three grape varieties dominate, a perfect trio for crafting top quality, traditional method sparkling wines; Pinot Noir, Chardonnay, and Pinot Meunier. The UK is finding its identity with sparkling wine, but increasingly too several wineries are producing delicious still wines. Crisp and aromatic whites from Bacchus and Pinot Gris, vibrant reds from Rondo and Pinot Noir, and berry fruit boasting rosé’s from a blend of varieties.

What is so exciting about the UK wine industry at current, is that it is still so new, that unlike other old-world wine-producing countries such as France and Italy, which have seriously restricting age-old regional laws, the UK does not, which makes it a unique opportunity for experimentation and discovery. A range of diverse styles and emerging talents are surfacing, the UK is exceeding expectations in terms of quality, firmly placing itself on the map as a premium wine-producing country. Winning global praise and accolades, their sparkling wines often beat well-established Champagne houses in major competitions. We are even seeing global wine brands sweeping in for a piece of the action and purchasing land for themselves.

We at Astrum have been eagerly observing this growing success story. This is such an exciting time for the UK wine industry, and with it being right on our doorstep, we couldn’t resist the chance to be involved with its promotion and progression.