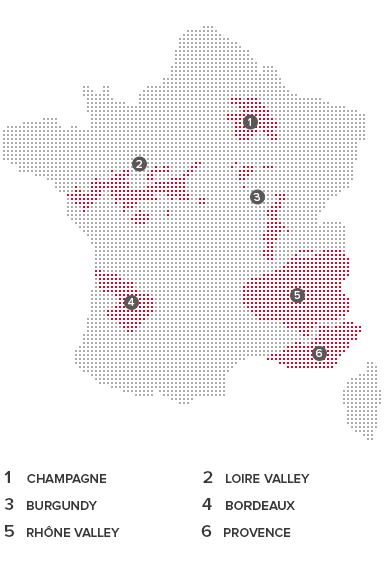 France is arguably the world's most important wine-producing country. For centuries it has produced wine in greater quantity, and many would suggest greater quality, than any other country on earth. Wine is historically engrained in French culture at almost every level of society despite consumer preferences changing over the centuries. It is down to the wide variety of wines and styles historically available from France that has ensured its legions of admirers: red, white, rosé, sweet, dry, sparkling, opulent, austere, fruity or mineral-scented, French wines are the standard by which others are judged. For example, Chablis produces the world’s best example of crisp, minerally Chardonnay, Champagne makes the most complex sparkling wines, and Burgundy the world’s greatest Chardonnays and Pinot Noirs. Other countries produce excellent wines from these particular varieties, and differences are fascinating to compare, but France still leads the way.

The diversity of French wine is due, in part, to the country's wide range of climates and soils. Champagne, France's most northerly region, has one of the coolest climates in the wine-growing world - a stark contrast to the warm, dry Rhone Valley 350 miles (560km) away in the south-east. Bordeaux, in the south-west, has a maritime climate heavily influenced by the Atlantic Ocean to its west and the various rivers which wind their way between its vineyards. Far from any oceanic influence, eastern regions such as Burgundy and Alsace have a continental climate, with warm, dry summers and cold winters. In France's deep south, Provence and Languedoc-Roussillon enjoy a definitively Mediterranean climate characterised by hot summers and relatively mild winters.

Geology and topography play an equally important part in the diversity of French wine: indeed the concept of terroir was born in France. The country's large number of internationally recognised wine regions and sub-regions reflects its wide range of soil types, and the landscapes which created them. From the granite hills of Beaujolais to the famous chalky slopes of Chablis and the Loire, the sites in which France's vineyards are planted are considered of vital importance, and are at the heart of the terroir concept.

A region's terroir inadvertently dictates the grape varieties used to produce its traditional wines, as vignerons always grew whatever was best suited to the local soils and climate from the range of varieties available to them. Thus, the relationship between French wine regions and their key grape varieties evolved naturally over a long period time: Pinot Noir and Chardonnay are closely associated with Burgundy, Cabernet Sauvignon and Merlot with Bordeaux, Viognier, Grenache and Syrah with the Rhone, Cabernet Franc and Chenin Blanc with the Loire, and so forth. France's appellation system was created in the early twentieth century and has since been imitated in many countries around the world. These laws define each wine region and its boundaries, impose strict rules around winemaking practices and protect the names of French wines, guaranteeing quality and provenance of the wines. For the most part, these geographic divisions really do tell you something about wine quality, something that is not true of most other wine producing areas in the world. For example, though the talent and hard work of individual vignerons is key in guaranteeing a wine of quality, a well made wine from Grand Cru sites within Musigny or Gevrey-Chambertin will be of a better quality level (most of the time) than those made from a Villages appellation.

Still today, France is viewed as the source of the world’s greatest wines, and the good thing is that these are available in a range of prices and styles that will fit everyone’s needs and desires.