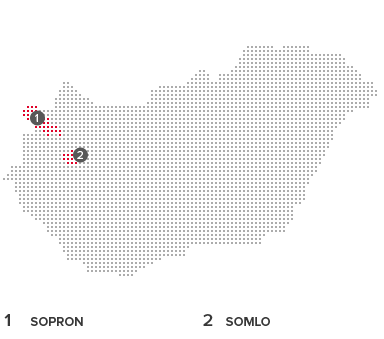 Hungary has long been the home to one of the world’s most famous wines, Tokaji, with the sweetest version, Eszencia, sought after by European nobility for centuries. Today, Hungary is also known for its distinctive wine styles ranging from light and dry whites to sturdy reds, as well as the world famous dessert wines of Tokaji.

Historically, due to its unique climate and soils, Hungary was always viewed as a source of extremely high quality wines, but the advent of Communism greatly damaged the reputation of Hungarian wines in the 20th century. However, since the fall of the Iron Curtain the Hungarian wine industry has been on a tear. After many years of mismanagement, lack of funds, technical knowhow and equipment, the renaissance of the Hungarian wine industry has been under way and today, Hungary is a country where many exciting wines are to be found. As a consequence of land redistribution in the 1940s, the vineyards have fragmented ownership, and many estates have to work with disparate plots, but this also allows numerous winemakers to have access to the best vineyards.

Hungary’s huge and long-untapped fine winemaking potential has, unsurprisingly, attracted considerable foreign investment with many of the world’s most famous wine estates setting up new estates here. While some producers in lesser areas are still undercapitalised, investment in the traditionally famous wine areas has been intense and rapid, allowing for the latest state-of-the-art winemaking and bottling equipment to be installed and very clean, flavourful wines to be made, usually at very competitive prices.

Important local grape varieties include Kadarka, Portugieser, Furmint, Hárslevelu, Olaszrizling (better known as Welschriesling, common in Austria and, to a lesser degree, in Italy) and imported international varieties such as Cabernet Sauvignon and Merlot. The best known Hungarian wines are still the Aszú Tokajis, labeled with a range of puttonyos (usually three to six; a puttonyo is a measure of sweetness, and refers to a 20-25 kg hod of Aszú grapes), The highest level of sweetness is achieved by Aszú Eszencia.

There are 22 delineated Hungarian wine regions which are concentrated in three major geographical groups namely – Transdanubia, The Northern Massif and The Great Plain. Sopron is the most westerly wine region of northern Transdanubia and is effectively a continuation of Austria's Neusiedlersee-Hugelland. In the west of Hungary lies the wine region of Sopron: predominantly red wines are produced from vineyards located between Lake Neusiedl and the Sopron Mountains – a zone where Pannonian and subalpine terrains converge. The foothills of the Alps bring coolness, the lake stores warmth making Sopron famous for its red wines that, thanks to the unique microclimate and soils, combine power and freshness. Cabernet Sauvignon, Cabernet Franc, Merlot, Pinot Noir and the indigenous Kekfrankos varieties are mainly grown here. Somlo is the smallest designated region in Hungary, a single hill midway between Pannonhalma-Sokoroalja and Balatonfeldvidek.