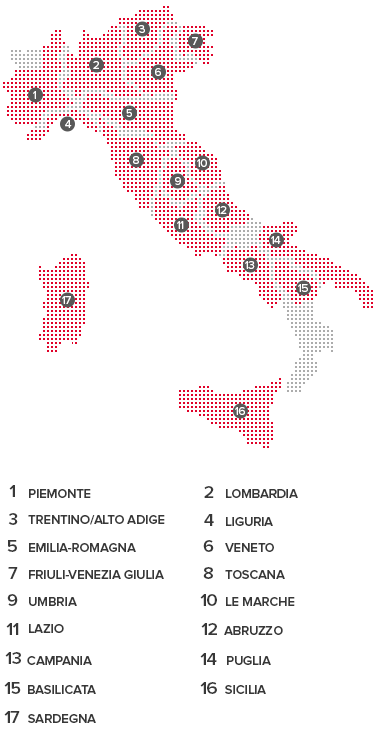 Italy is the country most steeped in winemaking history with by far the largest number of local or native grape varieties. At last count, Italy grows an estimated 2,000 different grape varieties (more than all those from France, Spain and Portugal combined), of which roughly 400 have been genetically identified. Though blessed with a huge variety of microclimates and terroirs, it is these relatively unknown native grape varietals that represent the single greatest winemaking asset shared by Italian producers.

Another very important feature of Italian wines is that Italians like to drink wine with food, and so prefer sleek, high acid white and reds that will generally match well with food. Italian wine is the most widely exported in the world, with Germany, Great Britain and the United States being the main importers.

There are myriads of wines resulting from many climates and terrains. Differences in soils and historical backgrounds have led to an Italian classification system of Denominazione di Origine Controllata or DOC (modelled after the Appellation d’Origine Controlée or AOC of France), Denominazione di Origine Controllata e Garantita or DOCG and Indicazione Geografica Tipica or IGT. These are not quality markers, but rather a guarantee that the wines are made from grapes grown in specific areas, from specific grape varieties and in a specific fashion; producers need to abide by government imposed parameters, such as minimum yield levels and oak-aging periods.

Due to the fact that Italy has long been associated with viticulture and winemaking, many of its wines are not just varietally labelled, but are named after a specific place. This is similar to what happens in France and is beginning to happen in New World producing countries as well. Clearly, some areas in Italy are better suited to certain grape varieties, and the resulting wines are better or characterised by a specific aroma or flavour, than those made elsewhere with the same grape. For this reason, you will find wines made with the Sangiovese variety that are labeled either Sangiovese or Chianti Classico. Similarly, in Piedmont both Nebbiolo and Barolo wines are made. This is because the wines made in the small production zone of Chianti Classico or Barolo are different from those made elsewhere in Tuscany or Piedmont, and are therefore labelled with the place name to set them apart.

Though Italy has long been known as a red wine country, some of its most famous wines are white: Soave (made mainly with the Garganega grape), Verdicchio dei Castelli di Jesi and Verdicchio di Matelica (made with the Verdicchio grape), Ribolla Gialla, Friulano and Malvasia wines from Friuli Venezia Giulia, Vermentino from Liguria and Sardinia, Fiano and Greco from Campania. World famous reds include those of Barolo, Barbaresco, Gattinara and Carema (all or mainly made with the Nebbiolo grape), Chianti, Vino Nobile di Montepulciano and Brunello di Montalcino (all or mainly made with Sangiovese), Aglianico del Vulture and Taurasi (all made with the Aglianico grape), Valpolicella and Amarone in Veneto, and Nero d’Avola from Sicily. International varieties such as Cabernet Sauvignon and Merlot also play leading roles in specific areas, such as with the 'Super Tuscan' wines (which most often are blends of international varieties, but can be 100% Sangiovese). Each of Italy’s 20 regions produces a range of wines highly typical of its terroir and traditions and the wines are some of the world’s greatest.