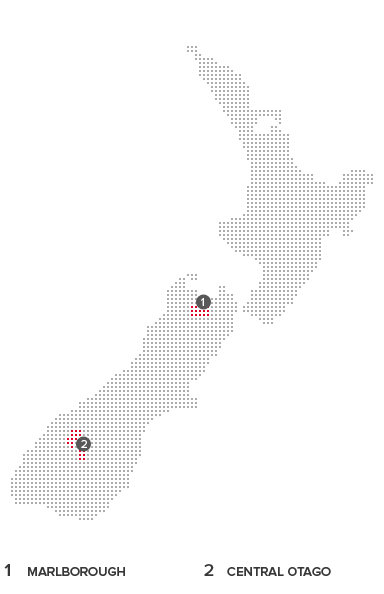 New Zealand is a relatively new winemaking country that has, in a very short time span of thirty years or so, made a name for itself as one of the best spots on the planet for Sauvignon Blanc and Pinot Noir. This is no small feat, since Pinot Noir especially, can rarely deliver truly great wines outside of Burgundy. Yet it does exactly that in New Zealand.

The country lies between the 36 and 45 degrees latitude in the southern hemisphere making it the southernmost wine growing country in the world and it covers 1000 miles in length. It is blessed with a cool climate making conditons ideal for other cool weather varieties such as Chardonnay and Pinot Grigio (Pinot Gris), though the warmer parts of the country have also proven to be a source of interesting Syrah.

New Zealand has 10 major wine growing regions spread across the North and South islands, each with their own unique growing conditions that are reflected in the wide range of wine styles. These range from fruit-dominated wines that are best drunk young, to bold and character full reds grown in the warmer parts of the country. Most wine lovers know of the country for its globally recognised, distinct style of Sauvignon Blanc produced in Marlborough, which is bright, crisp and redolent in citrusy-herbal aromas and flavours that are instantly recognisable and unforgettable. Pinot Noir has become New Zealand’s second largest export varietal (after Sauvignon Blanc) and was first produced in the Auckland regions in the mid 1970s. It is now made in three main regions, each with their own distinctive style, Marlborough, Martinborough and Central Otago (which is New Zealand's highest and the world's most southerly wine region.) Marlborough, located at the north-eastern tip of the South Island, is New Zealand's largest wine region in both production volume and surface area under vine; it stretches from the small port town of Picton in the Marlborough Sounds to the east coast town of Kaikoura.

Marlborough is one of New Zealand’s sunniest and driest areas. Thanks to plenty of sunshine with cool nights and a long growing season, vibrant fruit flavours are characteristic here. Marlborough whites are feisty, pungent and dry wines of consistent quality. South-east of the Wairau Valley, the Awatere Valley has a cooler, drier climate, producing grapes with intense fruit flavours and minerality. Both sub-regions have stony, fast-draining, heat-reflective, infertile soils. In Central Otago, summer days are hot and dry with cool nights allowing for the development of flavour complexity. These climatic features along with the schist and mica-based soils, are reflected in the styles of wines produced in the region, as soil types have a distinct influence on the growth and flavours in the grapes. The wines of Central Otago have a noteworthy fruity intensity and are almost voluptuous compared to the Pinot Noirs produced in Marlborough which are lighter and more fragrant. Those of Martinborough display greater ripeness and softer fruit flavours and are subsequently more typical of a warmer climate.

The North Island's Hawke's Bay region is particularly suited for making Bordeaux Blend wines as well as high quality Syrah. Interestingly, the oldest vineyard of New Zealand was planted by the Roman Catholic Church in the Hawke’s Bay back in the mid 1800s. Cabernet Sauvignon and Merlot are the most extensively planted red grape varieties in Auckland, Northland, Waikato - Bay of Plenty and Hawke’s Bay.