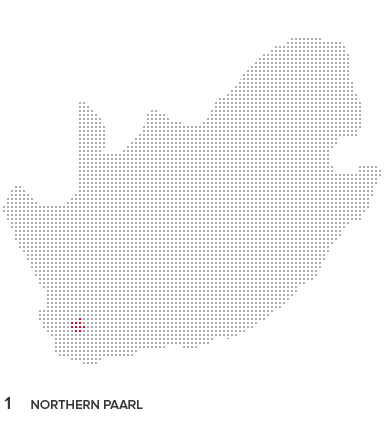 Despite being considered a ‘New World’ wine producer, South Africa has a longer wine-making history than both Australia and California, dating back to the 1600’s, with plantings near Table Mountain and Constantia, where Napoleon’s favourite sweet wine was produced. The wine industry in South Africa has served as an interesting reflection of social progress over the last 50 years, blossoming since the end of the apartheid and Nelson Mandela’s election to Presidency in 1994, when export markets started to open. The industry struggled a little initially from years of underinvestment and a sudden international surge to pressurise the industry through highly critical, comparative tastings, but there are now over 100,000 hectares of vineyards across the country, a flourishing wine tourism industry and a particularly passionate and exemplary commitment to sustainable wine farming.

South Africa’s wine country is not only amongst the most beautiful in the world, but it is also one of the richest biodiversity hotspots on earth, known as the Cape Floral Kingdom. With two-thirds of the country’s producers signed up to the Biodiversity & Wine Initiative, the introduction of a new sustainability seal and a regular auditing system, the future of South Africa’s delicate ecosystem and the protection of its water, flora and fauna look promising. The climate is predominantly Mediterranean and reassuringly reliable, with plenty of sun during the summer months and rainfall in the cooler winters. Atlantic and Indian oceanic breezes, Antarctic currents and night-time mists mean that ripening is a slow process and allows the intense fruit-flavours take centre-stage.

The three fine wine producing areas of Stellenbosch, Swartland and Paarl are the home to some very highly acclaimed wineries, and the setting for new private wineries (of which there are now over 500) rather than larger co-ops known for producing cheap wines for the domestic market and from which South Africa is trying to disassociate itself.  There is still a widespread tendency to plant more white grape varieties than red, although the split is slowly becoming less stark, as producers are beginning to  seriously concentrate their energies on their red offerings. The main grape, or cultivar, is Chenin Blanc, known locally as Steen, followed by Sauvignon Blanc, Viognier, Semillon, Chardonnay, Muscats and Colombard, whilst Cabernet Sauvignon rules the red wine production, followed closely by Shiraz and Merlot. South Africa’s indigenous grape Pinotage, which is a crossing between Pinot Noir and Cinsault, appears to be decreasing in production, so we are particularly excited to be able to list a gorgeous Pinotage from our new producer Scali in Northern Paarl.